It is almost always illegal to tape or monitor someones conversation, when those participating did not consent.  As of now 38 states and the District of Columbia permit individuals to record conversations to which they are a party without informing the other parties that they are doing so. These laws are referred to as “one-party consent” law, and as long as you are a party to the conversation, it is legal for you to record it. (Nevada Supreme Court has interpreted their one party consent law as an all-party rule.)

In Massachusetts it is not permitted to record either by phone or recording device if not all parties consent to or are aware of the recording.

Regardless of the state, it is almost always illegal to record a conversation to which you are not a party, do not have consent to tape, and could not naturally overhear. Federal law and most state laws also make it illegal to disclose the contents of an illegally intercepted call or communication. Some states have laws against criminal or tortuous purpose use of recordings, regardless of consent. 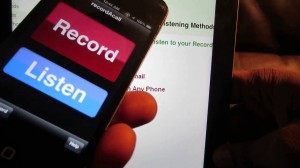